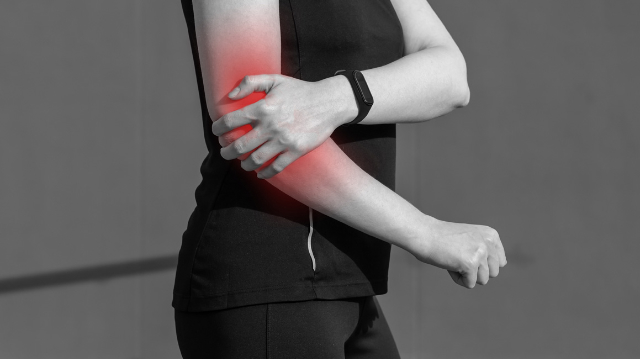 In the final post of our series, we’re focusing on the wrist and elbow. The elbow is the link between the upper and lower arm, and it can be subjected to repeated stress from many daily activities. As a result, most elbow–related injuries that physical therapists treat result from repetitive stress, either from one’s occupation or from certain sports. The wrist is comprised of 15 bones, which are connected by three primary joints and several other smaller joints, plus numerous muscles, ligaments, and tendons that reinforce these connections. Any of the structures of the wrist can be damaged by extreme movements—like twisting, bending, or a direct impact—that force it beyond its normal range of motion, or from repetitive use.

Below are some of the most common elbow and wrist conditions treated by physical therapists:

Tennis elbow (lateral epicondylitis): a repetitive strain injury caused by repeatedly performing the same movements—in tennis, other racquet sports, or one’s profession—over and over; common symptoms are pain and a burning sensation on the outside of the forearm and elbow that gets worse with activity, as well as weakened grip strength


Physical therapists can effectively treat these and many other painful conditions affecting the elbow and wrist. Most treatment programs will involve some combination of education, pain–relieving interventions, flexibility and strengthening exercises, manual (hands–on) techniques, and activity modification recommendations—particularly for repetitive strain injuries—but the specific contents of each plan will vary depending on the type and severity of the condition and the patient’s abilities and goals.

There is an abundance of research that supports physical therapy as effective solution for many of these conditions. For example, one long–term study of women with carpal tunnel syndrome found that there were no significant differences between patients that received manual therapy compared to those who underwent surgery both one and four years later. There were also no significant differences between groups in the rate of surgery over four years, and patient’s self–reported scores on their perceived improvements were similar. Other research has also found manual therapy to be capable of eliciting significant benefits in patients with carpal tunnel syndrome, while additional studies have shown that exercise therapy is effective for both tennis elbow and golfer’s elbow.

We hope this post series has opened your eyes to the wide array of benefits that physical therapy can provide for patients with nearly any musculoskeletal condition. And if you’re currently dealing with pain and have been putting off getting the care that you need, we strongly encourage you to see a physical therapist before your yearly benefits expire, as doing so now will help you get started on the right foot for the new year.